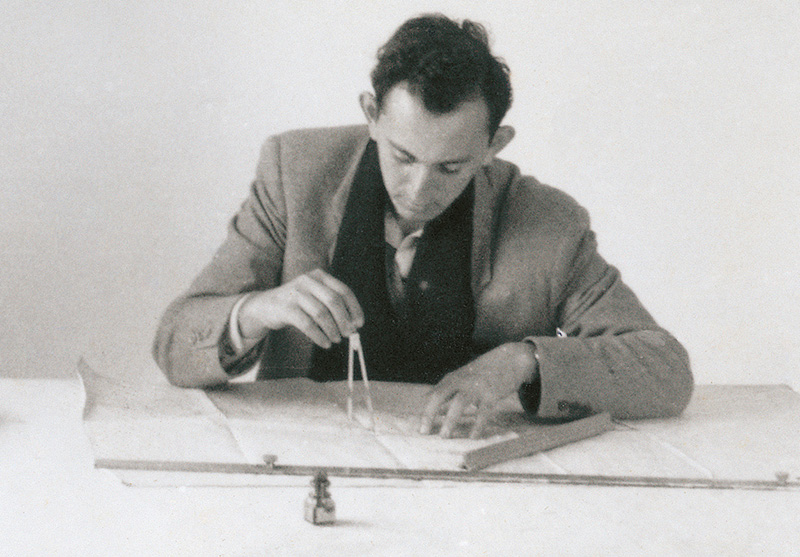 I was born in the city of Kalisz, Poland, to the Naparstek family in 1927. I had two older brothers: Yehudah and Shmuel. In September 1939, Germany started the war against Poland. The western part of Poland including Kalisz was annexed to Germany. Jews were required to wear a yellow patch with the Star of David. Those not wearing the patch were killed. In December the Jews of Kalisz were forced to leave their homes and gather in one of the market’s buildings, from which they were led on foot to the railway station and were sent to an unknown destination.

I was 12 years old. We got on the train carrying any possessions we could take and traveled until it stopped after a few hours at Krakow’s rail station. People were packed into freight cars. They shouted for water but were not allowed to go out. Nazi guards stood in the doorways of the cars with dogs and aimed to kill anybody who would dare to get out.

The train continued to the east, and arrived at Rzeszow. My family settled with a local Jewish family, until it was ordered by the Germans to leave the city. We took the train east to the town of Lezansk. At night the locals came and offered to help my family cross the San river and steal across the border to the Soviet Union for a fee. In the morning we reached the station on the Soviet side and found the train to Lvov (Lemberg). Lvov was full of refugees, and the Soviet authorities ordered them to leave the city to work where they were needed in the Soviet Union. My father received a tempting offer to work as a tailor in a cooperative in a small town 80 km west of Moscow, which was linked to a military airbase.

When Germany declared war against the Soviet Union on June 22, 1941, the airbase was bombed by the German Air Force endlessly. A woman who worked with my father, but lived far from the airbase invited us to come and live with her family, but as the Germans were moving quickly toward Moscow, my family decided to escape and go further east. To ease transit, we left clothing and other belongings, including photo albums, in the basement of our hosts’ house. We never saw our belongings again.

Freight trains full of refugees went back and forth to the eastern countries. As my family had no warm clothes and winter was cold, we decided to board one of the trains going southeast to the warmer countries. During the trip the trains were bombed by the Germans but we managed to reach the city of Tashkent. My father could not find a job there, so we continued to Tajikistan and settled in a town called “Kurgan Tube” near the Afghanistan border. In this town my father had a heart attack and died. The rest of the Naparstek family stayed in Kurgan-Tube until the end of the war.

I attended the local high school. I was known for my skills of painting and drafting. One day I went with my school Master to the capital city “Stalinabad”, where I was left at the History museum to copy the portraits of known Muslim intellectuals and scientists, to be displayed at school.

In 1947, after the war ended, my family left the Soviet Union and went back to Poland. We settled in the ruins of “Szczecin”. My brother Shmuel went out to look for relatives who survived the Holocaust. He met a cousin who had worked for the Germans in a weapons factory, and so survived. It was very exciting for my family to meet her.

Shmuel decided to go to Israel and left us. Two months later, the rest of my family also decided to leave. We traveled through Czechoslovakia and Austria to Salzburg, where there were two refugee camps. One day I walked to the other camp and saw somebody watering the garden in front of the house. To my surprise it was my brother Shmuel. This was a very exciting meeting. A month later, Shmuel left for Israel, where he joined the “Har’el” brigade of the “Palmach”.

I decided to go to Israel as well, leaving my mother and my older brother Yehudah in Salzburg.

Israeli “Hagana” guides led a group of Jewish youth, including me, across the border to the village of San Valentino in Italy. It was a dark night, the dogs barked loudly, and we were afraid the Italian police would catch us, so we ran to a field of hay to hide. In the morning we found ourselves surrounded by the police. We were caught and put in prison. After we were released, we tried again several times.

Only after bribing the Italian guards, could we get into Italy. We got to Rome by train and had a “Dakota” airplane waiting for us. It took us to Israel and we landed in Haifa.

I joined “yiftach”, a Palmach brigade, and was trained near Tel Mond. I had a chance to meet my brother Shmuel once, for the last time, in Tel Aviv, before my brigade was transferred to the south. My brother’s troops were positioned in the Jerusalem mountains. During one of my holidays, when I was visiting relatives in Tel Aviv, I was informed about the death of Shmuel. His command car was blown up by a mine and he was killed. He was buried in Kiryat Anavim.

In the “Dani” operation, the Egyptian army severely shelled my brigade, and I was wounded. I spent a year in the hospital, recovering and was released from the army as a disabled veteran.

For my living I worked as a draftsman in the Engineering Department of the Tel Aviv Municipality.

In 1954-56, I studied painting at the Avni institute and from 1955–1965 I participated in some exhibitions, some group and some solo exhibitions.

In 1957 I went to Paris to continue my studies at the “École Nationale Supérieure des Beaux-Arts”. My works were presented in the “Mariac” gallery In Paris as well as in a gallery in les-Andelys (Normandy). In 1958 I participated in the “Jewish Artists Exhibition” in Paris and my illustrations for poems of Bertold Brecht won the Adolf Newman prize. Later on, in 1967, “Sifriat Hapoalim” press published the book of Bertold Brecht’s poems with those illustrations. 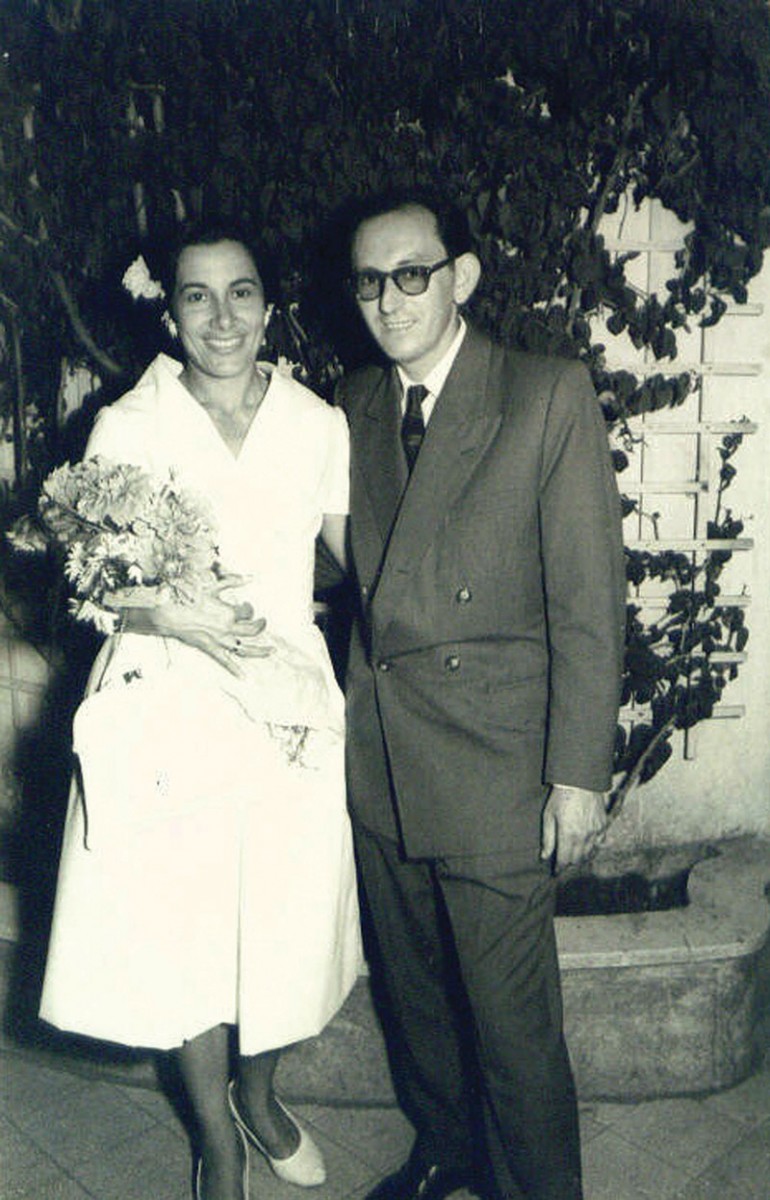 At the end of 1958 I returned to Israel where I met my future wife Tsafrira Yarkoni-Levy. We were married in 1959, and in 1960 my son Arnan was born. My daughter Tamar was born two years later.

In this period, I dealt with applied & artistic graphics, painting and exhibition design.

My teachers at the Avni institute were: Moshe Mokedi, Yechezkel Shtreichman, Avigdor Steimatzky, and Marcel Yanko.

Of course, I was very much influenced by them but at the same time I wanted to create something new. At a later stage I developed a technique of mixing polyester with metal powders: bronze, silver and gold. I combined the mixtures with ready made materials like screws, nails, letters and corrugated cardboard to create my own artistic expression. I used to work in a studio attached to our apartment. The intensive work and the sharp smell of the polyester became part of family life at that time. (As an anecdote, I can tell a story about my son who was 5 years old. He was so impressed by the polyester that when the kindergarten teacher asked the kids for names of colors, he raised his hand and said “Polyester color”). Those works were featured in a solo exhibition at the “220 Gallery” on Ben Yehuda Street, Tel Aviv, in 1965.

In 1968, I became aware of plans to establish the first Israeli TV channel. I decided to travel to Italy to participate in a TV stage design course, intended for the developing countries. After this course I continued to Paris, for further training in the stage design department of the O.R.T.F studios. After returning to Israel, I joined the TV foundation team as a senior stage designer and worked for the Israeli Broadcasting Authority (IBA) for the next 29 years until my retirement in 1997.

Some of the earlier sets I made for TV were for: “Round Studio”, “Summer Studio”, “Telestav”, “Duo” and “Box Office”. All of these shows were directed by the late Ralph Inbar, who came from Dutch TV when the channel was established. I worked with him, and we had a mutual understanding. I was the art director of all the programs he created for Israeli T.V. mentioned above. In these programs we wanted to create an atmosphere that was popular on French television, known as: “a white backdrop.” We created a module of set parts that can be assembled according to the needs of various programs. When we started to broadcast in color, the white background allowed us to highlight the set’s colored elements, according to various different uses. Ralph invited his colleague, a lighting designer from Dutch television, Jan Hizamance, to work with us at the Herzliya Studios. Jan brought innovation to the lighting and created a new dimension in this area.

Jan was also my partner in designing the stage for the Eurovision song contest held for the first time in Israel in 1979 at the International Convention Center, Jerusalem. This design is, without doubt, one of the most prominent of my work in stage design, and was appreciated for years as a significant milestone in the field. The event was produced by Alex Giladi and the other main contributors were: director Yossi Tzemach, choreographer Gavri Levi, mime Yoram Boker and conductor Itzhak Graziani.

From 1969 to 1973 I did the stage design of some of the IBA Song Festivals which were from the important events at that time. Later on I did also the stage design for the Eurovision pre-contests. 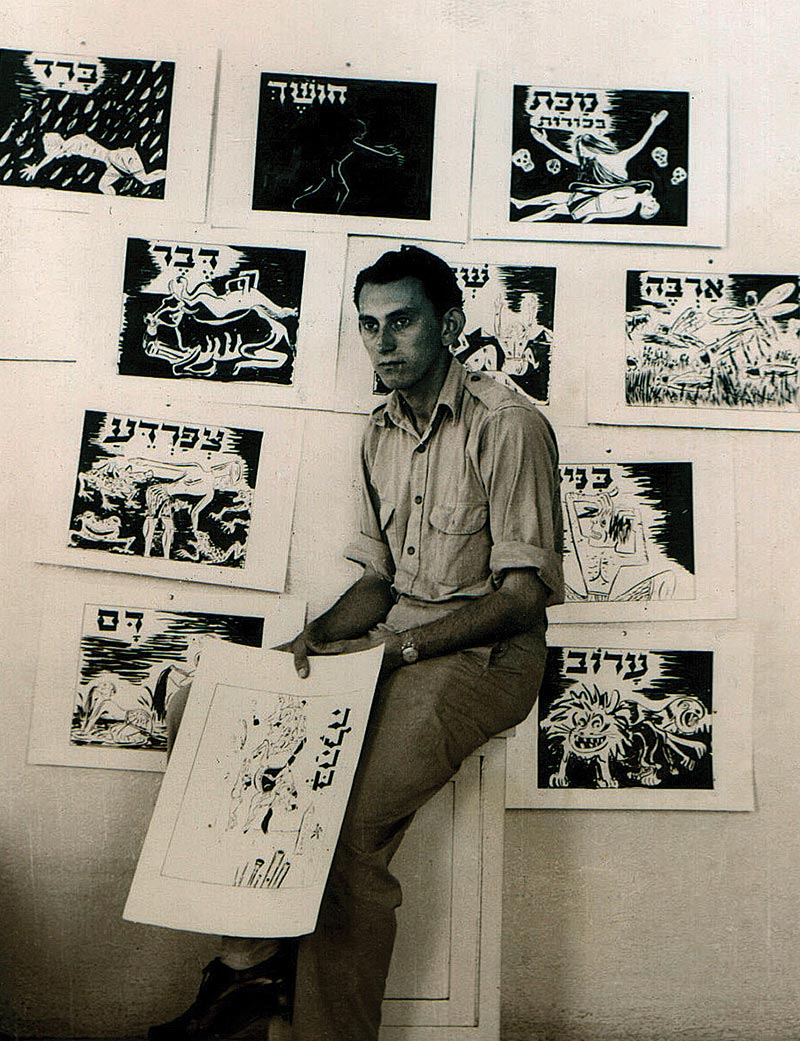 I participated in creating the shows of Yaron London such as “Petals” and “Hebrew - a beautiful language”, and the Amos Ettinger show “Such a life”. I also designed the stages for the evening shows of Dan Shilon on the first channel and for Gabi Gazit on the second channel.

Parallel to my work on television, I did stage design to theater, events, exhibitions, films and multimedia shows.

My life has been certainly fascinating and interesting. One word to describe it is the word “innovation”. To get up in the morning with new ideas, do things you never did before, be part of the newest projects and continue to be current and active.

I hope that this book will be able to transmit some aspects of my life and to show my contribution to the artistic work of the state of Israel from its early years to the years of the 2000.