He is known as a stage designer who designed the stage for the Eurovision Song Contest, and for "Fantasy in Wonderland". Now Dov Ben David is showing an exhibition of his works called "PhotoPainting", which consists of color photos of light reflections, in which he demonstrates his love for the play of light and motion in space.

He feels comfortable in an era of technology that we find overwhelming. Many people want to return to the good old days, when women wore long dresses and people walked slowly, or traveled for days in horse-drawn carriages. Dov Ben David is not fazed by all the machinery and electronics of today. He proves that humans can co-exist with technology. He can not only live in peace with it, but use it comfortably.

"I once had a conversation with a pilot" - he says, "He told me he was not ready to absorb more information. He is closed. All he could take comes from the set of clocks in front of him. I'm just the opposite. I want to know about all what is new, I want to try everything. To my regret I can not take advantage of everything. Today for me to radiate a laser beam in a straight line is not interesting. It's like riding in a straight line out to sea. But I wish to take this beam and make something with it".

To the cameraman he says: "Look, there's no choice, these are the conditions that you have for shooting, so let's see what we can do with it".

Then he is showing interest in the mechanics of the modern camera, and compares it with his camera. Both these references to the cameraman sum up, perhaps, the artistic way of Dov Ben David's activity: How can we work in conditions that are limited, with most of the innovations at our disposal?

Before one looks at the works in the exhibition "Photopainting" (Amalia Arbel Gallery) one should forget all the heavy portraits hanging in our living rooms, and the out of fashion Abstracts. With clear heads, it is easy to remember the simplest forms in which we live - a circle, a square, and a triangle. Around shapes and within them, there is light, because that is what we have in real life. Light comes from above and from outside, and from between folds and shapes.

Dov Ben David catches the light and uses it as a child sitting relaxed on the mat and having fun. For him light comes to demonstrate, he says, the three motifs that include everything in this world - space, movement and reflection. We are in space, moving, and the light reaches us in different reflections. In his roaming around the globe, he collects mirrors, metal, and plastic pieces, materials which play with light. With colored gelatins he paints the light in hundreds of colors, and projects them on simple forms he paints. Finally, he prints his art. In fact, the inventive process lasted six years, almost secretly, at his studio in Ramat Hasharon. Meanwhile, he became known to the audience by his works for theater and television. His leisure time is destined for what he calls "my games." From his many works, he chose two dozen to be displayed on the wall. In addition to that, Ben David projected some more of his works, accompanied by music, at the back of the gallery: Beyond black screens, one can imagine or meditate, absorbed in devotion to most of one’s senses. Slides are projected in the darkness, in front of one’s eyes, and the light, coming from the back, screens their colors pleasantly. Then - it turns out, that the music flowing around in this intimate darkness, adds to the visitors' enjoyment of the multimedia.

Continuity is not boring

"But I always dealt with multimedia", says Ben David. "What is television if not multimedia? Music, dance, sounds, colors, voices. I desire to unite all Media in my work. But, what happens in theater and television is, that you are still subject to the director's instructions, and finally he makes use of your work as he likes. 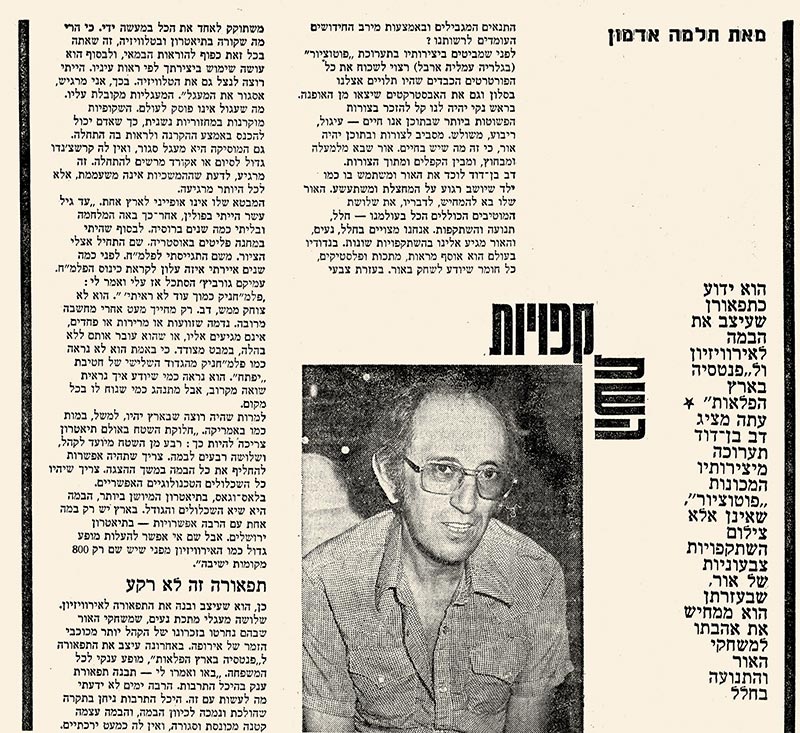 I would like to take advantage of television as I like. This, I feel, will close the circle. "I like Circularity. It never stops. Slides are projected in continuity, so that one can enter in the middle of the show and see it start. Even the music is a closed circle, and has no crescendo or a chord to end, or an impressive beginning. It's reassuring to know continuity is not boring, but, at most, relaxing.

His accent is not typical to one country. "Until the age of ten I was in Poland, then - came the war, and I spent several years in Russia. Finally, I stayed in a refugee camp in Austria. There I started painting. Then I joined the Palmach, and made " Aliya" to Israel. A few years ago, I drew a bulletin for the Palmach. Amikam Gurevich looked at me and said:" 'Palmachnick' like you I have never seen".

He does not really laugh, Dov, Just smiles a little after a long thought. I think horrors or bitterness or fears do not reach him, or he passes over them without fright.

He would like to see stages in Israel as they have in America: "The division of space in the theater should be like this: A quarter for the audience, three quarters for the stage.

There should be a possibility to change the whole set on stage during the performance. You must have all the newest technological facilities.

In Las Vegas, in the oldest theater, you find the best equipment.

In Israel there is only one stage with many possibilities - in the Jerusalem theatre, but you can not use it because in the hall there are only 800 seats."

A setting is not a background

Yes, it is he who designed and built the set for the Eurovision.

Three moving metal circles, on which the light plays games, will be remembered by the audience more than the star singers of Europe.

Lately he designed the set for "Fantasy in Wonderland", A great performance for the family. They came and told me: We would like you to build a grand set for the stage in the Mann Auditorium. ("Hechal Hatarbut")

For a long time I did not know what to do. The ceiling in that hall becomes lower and lower gradually to the stage. The stage itself is small and enclosed, and has almost no sides." Eventually I found solutions.

The buildings in the set are reminiscent of the skyline of New - York, with the many colorful lights. Here again, the light and the lighten geometric shapes.

Israeli television technicians had difficulties, at first, understanding the concept of light as Ben David plays with it. "I was painting the whole studio with a bright white color, to enlarge the perspective, and this was in contrast to what they knew about photography. But we needed to find the right balance between the amount of white color and the light. They should serve each other, not fight each other. Luckily I was working with Ralph Inbar; we made plans as "Ulpan agol " and "Telestav", and we had a common language. Then people began to watch TV in the way they do in Europe. Suddenly they realized that this device is not intended only for interviews, when two people sit and talk to each other. A set is not a background. Your home is your background? Objects that surround us are ourselves."

In a few days Dov will fly to the U.S. for a year "to continue my "games", to develop the technique of the PHOTOPAINTING and to relax each time anew. “It's weird. I get to a drawing that has only two colors, black and yellow, and I relax. I think: actually these colors are sufficient, no more is needed. Then I try a new spectrum, and relax again".